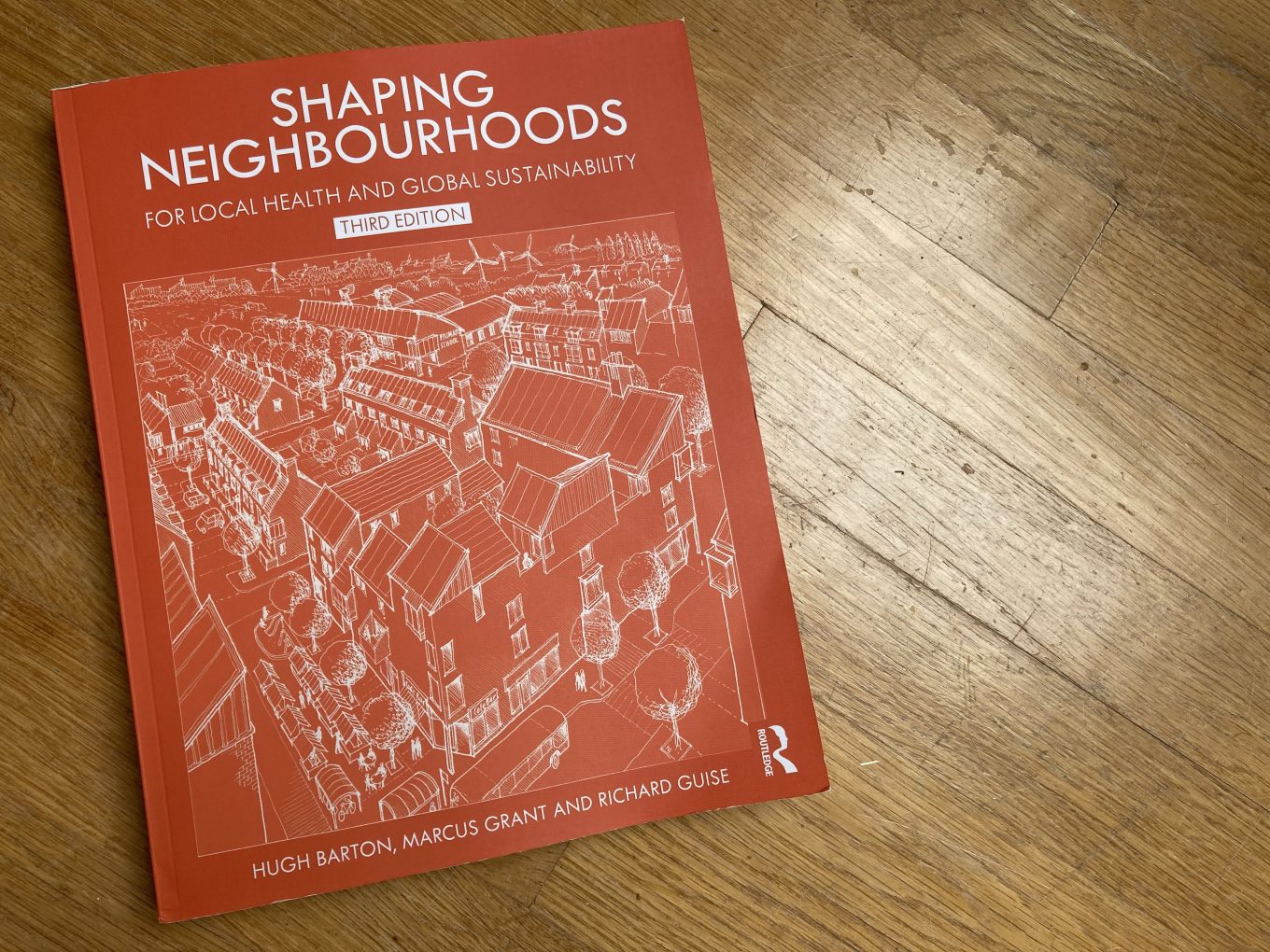 This book really is a ‘must have’ for all urbanists, though it may end up on your desk rather than your backpack, as it is 418 pages long and heavy with illustrations. The full title of the third edition explains its breath. As the authors say in their Preface ‘Despite the impressive scope and depth of evidence now available, most cities and neighbourhoods continue to evolve in unhealthy, unsustainable ways, driven by the inertia of the market and institutional conventions, land ownership patterns, and neo-liberal politics.’ The authors, who all have taught at the University of the West of England in Bristol, with both Hugh and Marcus working with the World Health Organisation (WHO) Collaborating Centre, bring academic as well as consultancy experience together in a highly effective and readable way.

The book, manual perhaps a better description, is organised so it can easily be dipped-into. Eighteen case studies and numerous captioned snapshots provide convincing evidence of how places can be made to work much better. These are drawn from all over the world, not just the old favourites such as Vauban in Freiburg, Hammarby Sjostad in Stockholm and Portland, Oregon, but also from Marmalade Lane in Cambridge and Street in Somerset which show that innovation can be found in the UK too.

Perhaps the book’s greatest strength is the wealth of diagrams, check-lists and flow charts on every page. Like the previous editions, which proved so popular that Routledge asked the authors to produce an updated version, the layout is exemplary, and a delight to dip into. The first edition was in 2003 but the authors have avoided the temptation to cover changing government policy, and instead focussed on what are eternal issues for making good settlements with a new emphasis on neighbourhood planning.

The structure is broken into six chapters entitled orientation and principles, a neighbourhood planning process, providing for local need, working with natural systems, neighbourhood strategy and neighbourhood design and placemaking. There is a useful new chapter on the process of creating a neighbourhood plan – Hugh Barton drew up the plan for Stroud town centre – and expanded sections on natural systems and design, as well as countless smaller changes. The hand-drawn images are particularly appealing and should encourage readers to use their pens as well as their cameras.

Sometimes the lists are a little daunting, and while the questions in the development project checklist at the end are undoubtedly well-phrased, they cover five tightly spaced pages under sixteen different headings. Hence like most of the book, which is relevant for all types of situation, it will probably end up being copied and sections shared around, rather than bring read from cover to cover. The bibliography covers ten pages, and usefully highlights what the authors consider the ‘pivotal texts’.

The book is novel in showing health, not just the state of the environment, can be a compelling factor in causing people to work together, and act differently. It also provides the supporting evidence for changing direction and scaling-up our efforts, for example with natural systems. A good example is the section on providing cool and shade without consuming energy.

Collaboration is fundamental and, in the UK, our adversarial culture, siloed organisations and departments, and centralised institutions make it exceptionally difficult to change direction. Too Many plans end up a little like the Book of Common Prayer with fine phrases but little capacity to convert the unbeliever let alone influence the flow of resources. In asking one of the authors, who is an Academician, why we have so little to show for all the excellent guides and compendia, we agreed that the problem is not convincing planners and designers, though they are woefully small in numbers in most local authorities, but rather the engineers who insist on outmoded standards for roads and parking, and the volume house-builders who settle for an easy life  and end up building places covered in blacktop.

Each reader will find their own nuggets, and I was delighted to discover it is both practical and economic to harvest energy from road surfaces, and to use urban form to keep buildings cool. By dealing in one chapter of 90 pages with energy, water, food, waste and biodiversity, the reader will gain the confidence to deal with other specialists and ensure that developments are ‘future-proofed’.

So perhaps urbanists, with a world of good practice to draw on, should act as the brokers in bringing different professionals together, visiting example of good practice, as the book suggests, and then asking what are the lessons and what stops them being replicated? The book might feed into training sessions, especially when new appointments are made and teams set up using recovery from Covid-19, climate change or levelling up as the impetus. On page 3, in a box setting out the top ten qualities of a good neighbourhood, the first one is ‘a place where birdsong, rustling leaves, running water, and (for some) children playing can be heard, rather than the sound of traffic or industrial processes’. This was very much what the then leader of Cambridge City said in a study tour to Freiburg, and the impact can be seen in the quality of the much-praised neighbourhood like Marmalade Lane. Now all that is needed is to enable the engineers, transport planners and investors to share those values!