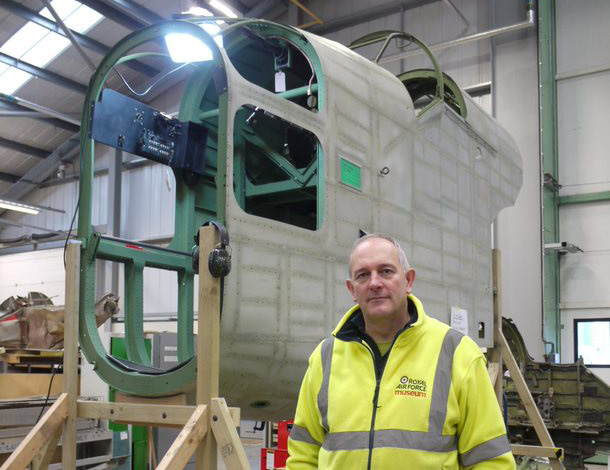 Having spent 26 years in the RAF as an aircraft mechanical engineer, the prospect of joining the RAF Museum was one I could not turn down. I joined in 2005 on the ‘shop floor’ and was given the task of continuing the Handley Page Hampden project. Over the years I found that I was learning a lot about the aircraft and I was meeting veterans who were involved with her during WW2 (aircrew, groundcrew and factory workers).

Our aircraft was shot down over the Kola Peninsula in Russia in 1942. It was being flown from Sumburgh in Shetland to a base near Murmansk where it would have been involved in convoy protection. They experienced severe icing and had to alter course, which took them too near a Luftwaffe base in Finland, where they were attacked by Me109’s. The poor old Hampden could not outrun modern fighters and was forced to ditch.  Three of the crew died in the crash, and two survived as prisoners of war. Now that they are gone, I feel it a privilege to tell the story of these brave lads who ended their war in one of the remotest and most inhospitable places on Earth.

In 2009 I was made Deputy Manager of the Conservation Centre and in 2013 I took over as Manager. My days of getting my hands dirty might be over (unless my keyboard needs a clean!) but this place will always be special for me as the home of a unique aircraft.

My Place is a section where people share places that are significant in their lives. If you would like to take part in My Place, simply email your photo and a text of up to 250 words to [email protected].