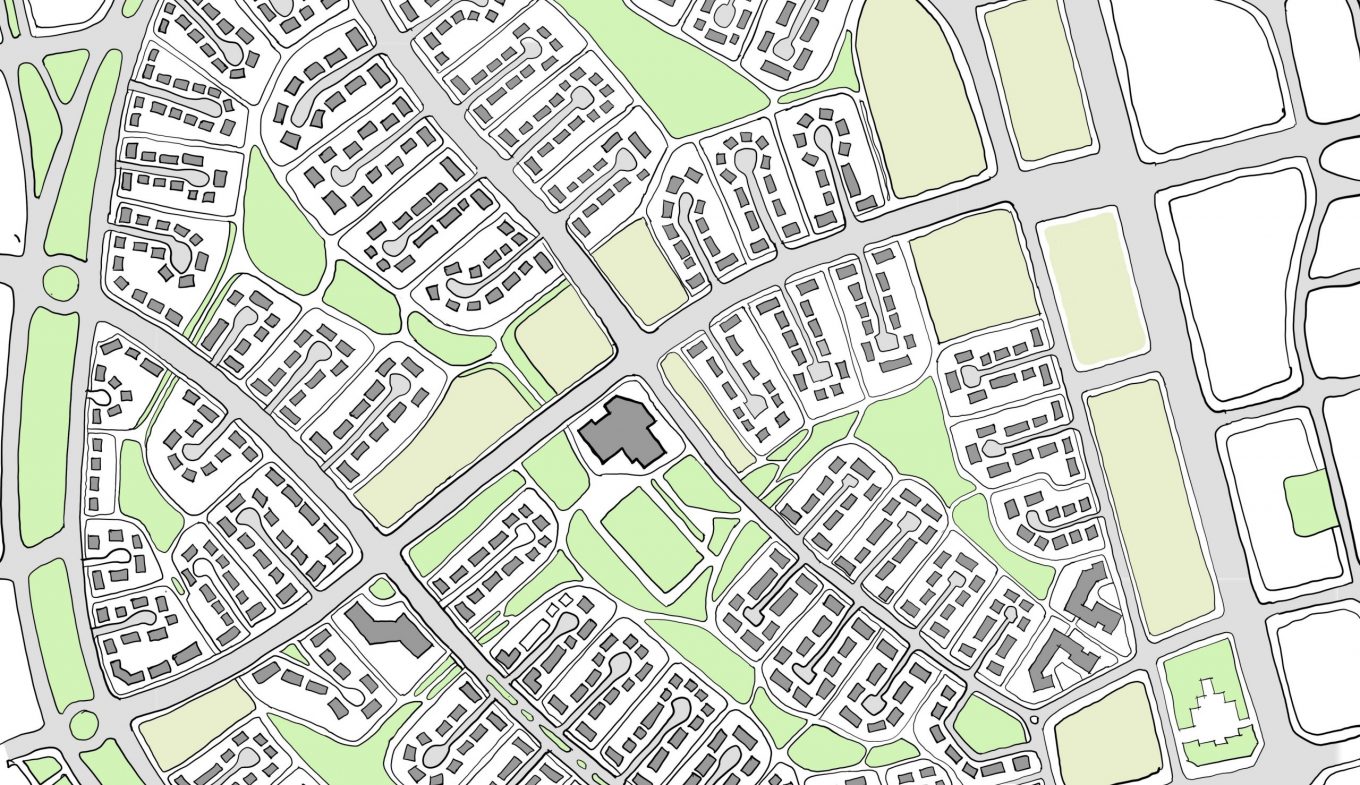 So many times when visiting British cities you come across something that makes no sense at all. A piece of urban planning, architecture or traffic engineering that seems to defy logic. What were they thinking? This is question that the Urban Idiot has sought to answer over the last few years. He we recap the first ever Idiot column.

It is a question worth asking because previous generations of urban professionals weren’t stupid, they generally had the best of intentions and what they did was based on research into good practice. They were not idiots – it’s just what they did that was idiotic. This of course begs the question of whether today’s planners, with equally good intentions, are making similar mistakes. This column is about the process by which good intentions turn into illogical outcomes. To do so we will look at brilliant but flawed ideas starting in this issue with Radburn.

When Clarence Stein was commissioned in 1929 to design a Masterplan for the Radburn estate in New Jersey he set out to build a “garden city for the motor age”. The housing layout used at Radburn was the first to create a pedestrian circulation system that allowed people to walk to the local centre, park and the school without the need to cross a road. It does this by the simple expedient of super blocks 300m by 600m with a series of cul-de-sacs pointing into the centre of each block. These cul-de-sacs provide car access to the front of each home while a separate pedestrian network links to the back gardens via which residents can walk through a central area of open space to local facilities. Like many influential schemes (Corbusier’s Unité d’Habitation springs immediately to mind) the original Radburn works beautifully and yet has inspired countless imitators that have been a disaster.

The layout of the Radburn estate completely turned on its head thinking on housing layout. Not only was it the first to separate cars and pedestrians but as a consequence it also invented the road layout based on distributor roads and cul-de-sacs. The first cul-de-sac was credited to Louis de Soissons in his plan for Welwyn Garden City, but this was just a way of opening up the centre of larger blocks, otherwise all the houses fronted onto a network of streets that, in the pre-car age were the domain of the coal man and the milkman. In Radburn the entire layout was predicated on cul-de-sacs and the street network was confined to history.

As so often with this type of innovation, the Radburn concept didn’t really come into its own until it infected the planning profession in the UK. Britain was the place where theories were built rather than just debated. Radburn, which was the product of the interwar boom in car ownership in the US had become one of the schemes taught to every British planner as part of their training. So when in the 1960s Britain experienced its own motor age it seemed to be a good place to turn for inspiration. The huge growth in car ownership in the 1960s made the case for the separation of cars and pedestrians seem obvious. In town centres and on high-rise estates this was done via subways and elevated walkways, but with low-rise housing it was Radburn that provided the answer.

Radburn estates were built throughout the UK from the early 1960s through to the early 1980s. As planning students in the early 80’s we were taught that it was the ‘correct’ way to do housing layout. However something was lost in translation, quite a lot in fact. As with many brilliant ideas, a layout developed for the middle classes in New Jersey didn’t work quite as well for a council estate on the outskirts on Hull. Radburn estates in the UK looked very different to the leafy streets of the original. They were built for council tenants, at high densities but also contained an additional refinement that guaranteed that they would never work. Whereas the houses in the original Radburn faced onto the street, British planners decided to turn them around so that they fronted onto the pedestrian network with cars relegated to rear parking courts. Anyone who has spent any time on a Radburn estate in the UK will know what a disaster this was. Residents no longer understood which was the private side of their home, indeed everything became public. Cars parked beyond high ‘rear’ garden fences were vulnerable to crime while the pedestrian walkways at the ‘front’ were deserted and dangerous. Overall the layouts became convoluted and confused making them impossible to police and turning them into no-go areas for anyone who didn’t live there.

The original Radburn was built at a time when car ownership in the US was approaching 50% of households and Americans drove around 200 Billion miles a year. This however wasn’t the issue of concern to Clarence Stein, the real problem was accident rates. Today’s Americans drive 3,000 Billion miles a year and yet the number of fatalities on the road is about the same as it was in 1929! The early days of motoring before highway codes and safety features were carnage. This gives us the final ingredient of a planning disaster – the moral imperative. Argue against the separation of pedestrians and vehicles and you may as well be in favour of killing children – there is no better way of silencing your critics. However as Mayer Hillman illustrated in his research ‘One False Move‘ the falling traffic accident rate amongst children that we have seen since the 1970 is the result of increasingly fearful parents not allowing their children out of the house. Whether Radburn layouts have helped or hindered this is a moot point.

So we have the ingredients of a brilliant flawed idea – an inspiring if misunderstood original concept, built for the middle classes and translated for social housing, inspired by a single issue and driven by ideology, adopted as good practice and taught uncritically and then applied by a generation of designers who assumed it was the right thing to do. It is only years later that it becomes clear how little sense it made.

The Urban Idiot will return in 2022, if anyone would like to suggest urban idiocy that need to be examined please contact [email protected].