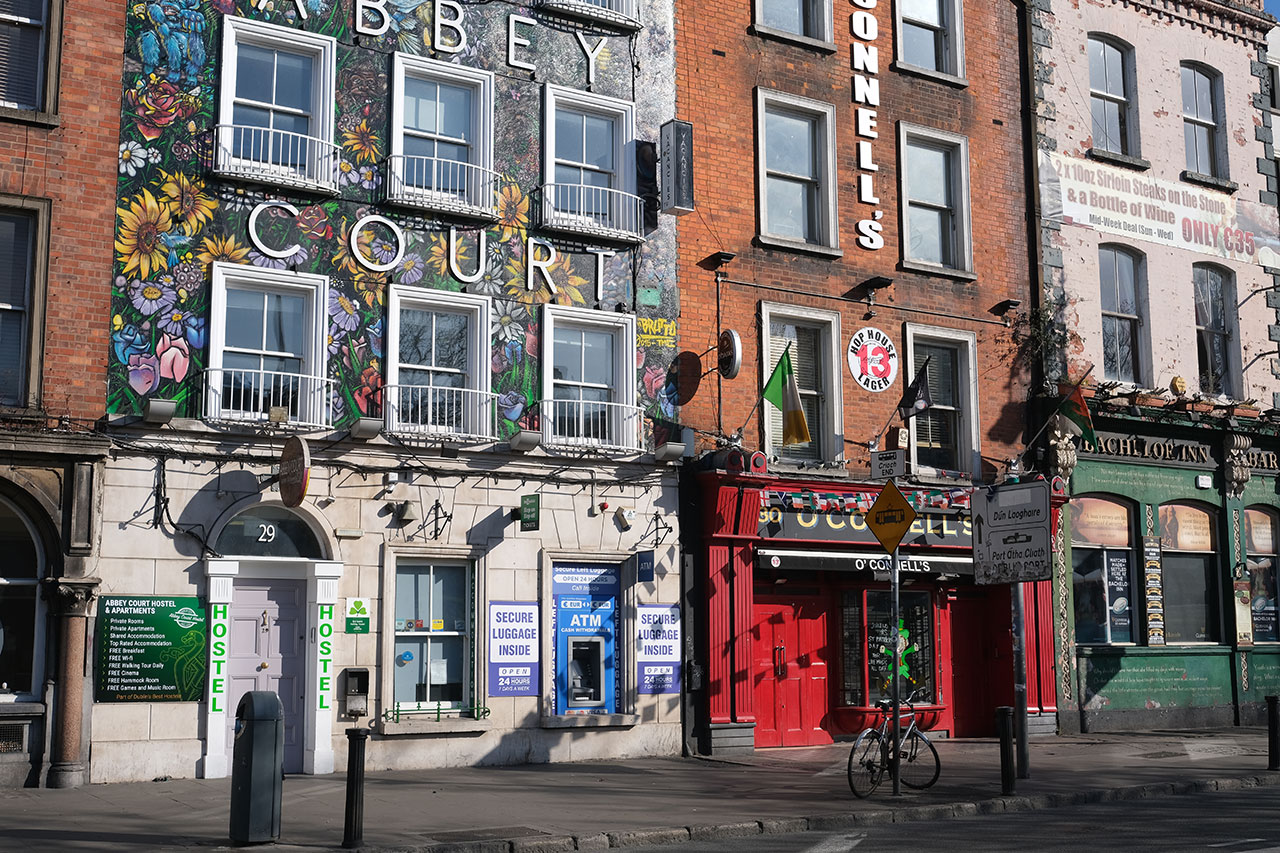 Of all the articles I’ve read online since our world was upended by Covid-19, the stand-out piece was Michael Wilson’s grim report in the New York Times about the devastating impact of the virus on a once-thriving ‘ecosystem’ that had grown up around the 48-storey Time & Life Building on Sixth Avenue in Midtown Manhattan.

“To approach this block today is like visiting a relative in hospital”, he wrote last July. “On a sidewalk once lined with food carts, a lone hot dog vendor stood one recent Friday on a corner below the building. His name is Ahmed Ahmed, and he used to sell 400 hot dogs a day. How many now? ‘Maybe 10’.”

The building, renovated a few years ago and rebranded as 1271 Avenue of the Americas, used to house 8,000 office workers, but the vast bulk of them were now working from home. At the nearby Rockefeller Center subway station, the number of MetroCard swipes on a June Monday fell by a staggering 87% compared to last year.

The steakhouses, bars, cafés and designer shirt and shoe shops — “creature comforts that made working in Midtown not only bearable, but even fun”, as Wilson wrote, were “vanishing, and with them, the men and women who fed, clothed, poured drinks for” all the people who worked in the Time & Life building and others on Sixth Avenue.

The same phenomenon has hit the City of London and so many other centres with large concentrations of corporate offices, in what the New York Times writer called “a cascade of loss upon loss” that has almost annihilated the entire ecosystem of services that depended on heavily-populated office buildings as their ‘anchors’.

Dublin is no exception. After Google and other big tech companies zeroed in on the Grand Canal Docks, establishing their European headquarters in the area — such that it was nicknamed ‘Silicon Docks’ — the cafés, bars and restaurants that had gathered around these hives of office workers are suffering tough times due to their absence.

As Ireland entered Covid-19 lockdown in March, Google told its 8,000 staff that they should work from home after one of them developed flu-like symptoms, and other tech companies followed suit. Even when the lockdown was eased, Google said all of its staff in Dublin could continue working from home until mid-2021 if they chose to do so.

In September, the previously booming Dublin office market was rocked by Google’s decision to drop plans to lease a new seven-storey block in Docklands, built on the site of a postal sorting office. Just three months earlier, the building had been sold by developers Marlet to Singapore-based Mapletree Investments for €240 million (£217 million).

Suddenly, all of the bets made by developers building office blocks on a speculative basis looked a lot less certain, even though construction is still continuing on numerous projects — including new European headquarters for Amazon and Facebook — in the hope that the office market would stabilise once the pandemic is finally over.

Frenzied construction of hotels in Dublin was also based on what now looks like wildly optimistic estimates for overseas visitors by the tourism agency, Fáilte Ireland. Reading the documentation compiled in support of these schemes — before the pandemic took hold — was like entering a parallel universe, where everything was projected on an upward curve.

The harsh reality, as elsewhere, is that tourism has collapsed. Hotel occupancy in the city fell to 17% in July, raising serious question marks over plans to build yet more hotels in the wake of a boom which had seen them popping up all over the city in recent years. Those still under construction look like incipient white elephants, at least in the short to medium term.

Airbnb has also taken a big hit, and not before time. Pre-pandemic, the San Francisco-based ‘disrupter’ had more than 5,000 ‘entire homes’ in Dublin available for short-term tourist lets, nearly all of which had no planning permission. At least 1,000 of them have since reverted to long-term lets, as desperate property owners sought to secure an income stream.

Regulations introduced in July 2019, ostensibly with the purpose of curtailing the widespread and usually illegal conversion of apartments and houses into tourism short-lets, have proved totally ineffectual. A year later, Dublin City Council had received a paltry 19 planning applications for changes of use and issued only 21 enforcement notices.

Over the Easter weekend, when everyone was supposed to be isolating at home, we went out after dark to photograph every residential building in the much-hyped Temple Bar ‘Cultural Quarter’. What we found were alarming levels of vacancy, suggesting that up to 40% of the area’s housing stock had been lost to tourist short-lets in recent years.

Even after the lockdown ended, footfall on the streets of Temple Bar and throughout the city centre was (and still is) a fraction of what it used to be, due to the absence of tourists and the large number of office staff now working from home. Businesses that were tourist-dependent, including many of Temple Bar’s pubs, have been closed since mid-March.

By contrast, suburban areas have been doing much better, as more people are patronising shops and cafés in their own neighbourhoods, or turn to shopping online rather than travelling into town to shop in city centre department stores. Retail may recover, but it is likely to be a different kind of experience with more ‘click-and-collect’ or home delivery.

“With no regular flow of tourists for the foreseeable future and many people working from home, there will be a permanent spending shift from city and town centres to the suburbs,” according to former Insomnia café chain owner Bobby Kerr. “This will create some opportunity, but it underlines the urgent need to redefine the role of our main streets and urban centres.”

His solution would be to “let people live” in retail buildings that are no longer required — easier said than done. Grafton Street, Dublin’s premier shopping street, has only one apartment building. Most of the upper floors of its shops — mainly owned by institutional investors — are used for offices or storage and no longer have separate access from ground level.

Dublin City Council has been trying to lure people back to the city by reallocating road space in favour of cyclists and pedestrians as well as closing more streets to traffic, at least at weekends, so that restaurants can place tables and chairs on the footpaths and carriageways — sadly using cheap white-painted picket fences to provide a sense of enclosure.

Dún Laoghaire-Rathdown County Council, which administers the more affluent south-eastern sector of Dublin, has been doing much better. It formed a crack multi-disciplinary team to install a twin-track cycleway on the coastal route between Seapoint and Sandycove and also vastly improved the main streets of previously traffic-choked Blackrock and Dundrum.

Of course, shops and restaurants in central Dublin would be doing a lot better if there were many more people living in the inner city. Although its population increased from 75,000 in 1991 to more than 130,000 in 2011, this was still not enough to achieve critical mass — and the construction of new housing in recent years has fallen way behind offices and hotels.

Misguided policies by successive governments have merely compounded the problem by dumbing down apartment design standards — yielding to pressure from the development lobby —  as well as facilitating the construction of block after block of student housing (another casualty of Covid-19), ‘build-to-rent’ and ‘co-living’ schemes catering for transients.

Affordable housing, designed for family living, is still sorely lacking — even though Dublin remains in the midst of a housing emergency. This is unlikely to be relieved by the modest additional funding announced in the government’s recent budget for shared-equity and cost-rental schemes aimed at first-time buyers is a relative pittance compared to what’s needed.

We need to recognise that everything truly is connected in the mesh of urban life — especially where people live and how they get around. That’s why the much talked about ’15-minute city’, composed family-friendly neighbourhoods with thriving local shops, cafés, restaurants and other service, must become a central objective after the pandemic finally comes to an end.

Frank McDonald AoU is The Academy of Urbanism’s writer-in-residence, an honorary member of the RIAI and an honorary fellow of the RIBA