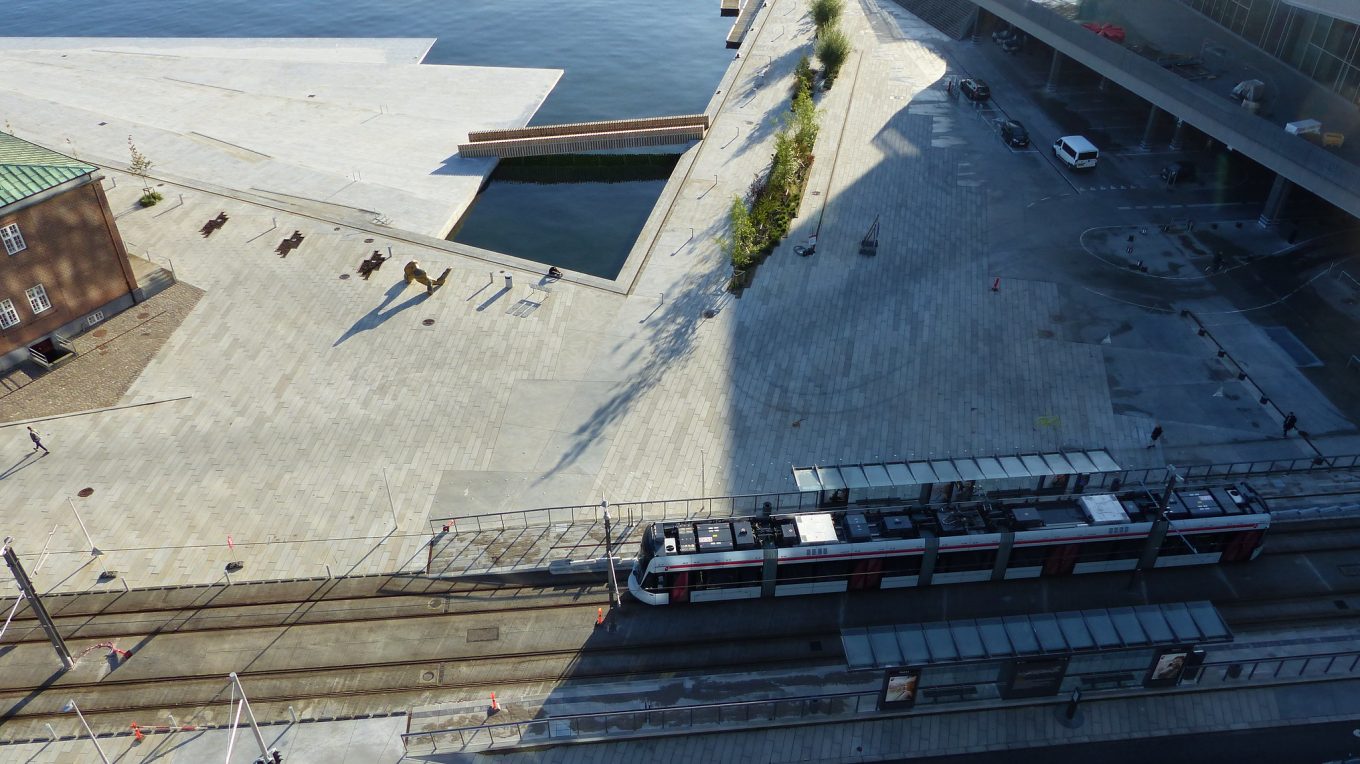 The AoU recently organised a virtual study tour of four tram systems seeking to learn from those involved in their finance and construction. Nicholas Falk, who organised the event, argues that trams are the future.

If you look at the cities recognised by The Academy of Urbanism’s Award the one thing that virtually all of them have in common is a tram. There  is something magic about trams, they attract people onto public transport who wouldn’t dream of using a bus, they take up less space, they don’t pollute and less tangibly, but perhaps most importantly, they bring a certain status to their host city.

As an experiment, The Academy of Urbanism recently organised a half day virtual study tour of tram systems sponsored by Irish Rail. The hope was this would add a new way of learning to the Academy’s toolkit to follow-up what we had learned through awards and study tours. At the event we travelled on trams in Dublin, Aarhus, Copenhagen and Nottingham, hearing from the people who built them and questioning through interactive sessions how they were built, planned and financed.

In one respect it was a strange time to be asking these questions. Post-lockdown, many of our cities are struggling, retail is in decline, homeworking means that office workers are yet to return and those that have ventured back to the office are less inclined to use public transport. Transport authorities have seen a huge drop in revenue so building new tram systems is probably the last thing on their mind.

cities are going to need to attract people without becoming clogged with traffic and choked with pollution. In doing this, trams could hold the key

On the other hand, people are moving out of cities, seeking more space. The danger is that when these people travel back to the centre they will do so by car. Whatever the future may bring in terms of new technologies or forms of work, cities are going to need to attract people without becoming clogged with traffic and choked with pollution. In doing this, trams could hold the key.

The UK saw a revival of investment in trams in the late 1990s and early 2000s when systems were built in Manchester, Croydon, Sheffield, Edinburgh, Birmingham and Nottingham. However the general picture is that the UK has invested far less in infrastructure than other countries in Europe or the OECD.

But tram systems face more than just financial problems, there are also the technical and economic issues of retrofitting lines into crowded city centres, public opinion, running costs and impact on businesses. So how have cities overcome these obstacles and can the lessons be transferred?  The symposium heard from four places that have successfully implemented tram systems in recent years:

Each of these systems have had a transformative effect on their cities, attracting additional investment, raising land values and narrowing inequalities such as isolation and pollution. In each case the tram has been a major catalyst for regeneration, raising values along routes and opening-up regeneration areas. In Dublin footfall in the centre went up by 30% and land values close to the line by 20%. Stephen Willacy described how the Aarhus tram had become the ‘backbone of its future collective infrastructure’, linking new housing with the hospital and university allowing the city to expand. These trams have also transformed investor confidence – publicity shots of these cities almost always feature their new trams – what Dick Gleeson of Dublin called ‘the magic of trams’.

There are environmental benefits in terms of noise and pollution and it was also pointed-out that steel wheels on steel rails avoid the particulate pollution of rubber types (the Oslo effect). However the UK and Irish examples had been less successful in promoting a major modal shift away from the car as has been seen in Denmark. The problem is not with the works in the city centre where all four case studies have taken the opportunity to create extensive car-free areas. More likely it is because of the more low-density structure of Nottingham and Dublin compared to Danish cities.

However trams are not applicable in all places, relatively low-density towns and suburbs may be better served by demand-responsive bus services. There is also an issue of how far technology can be expected to change through ‘autonomous cars’ for example, or Cambridge’s proposed Autonomous Metro. However though innovations like the Ultra Light Weight Tram being  piloted in Coventry have appeals, the British market is very small in world terms, which could make innovation economically unviable.

The process of building a tram system can be very prolonged with each of these systems taking 15-20 years from the initial proposal to the operation of the first tram. It is vital that the transport investment is seen as a fundamental part of a spatial growth plan and messaging also is hugely important in order to carry everyone with you. Edinburgh and Manchester both tried to link investment in the tram with a referendum on a congestion charge, crystalising huge opposition. There is also often opposition to the disruption and costs (particularly cost overruns) however in almost all cases, once complete, the systems are hugely popular.

In Copenhagen a cross party alliance was set up, and the government entered into a partnership, by establishing a company that could act like a private company but with a public purpose. Land was sold for maximum value but the revenue ploughed back in infrastructure with 25% of all the housing being for those on lower incomes. In England there is a more adversarial culture and a more fragmented planning system making this type of financing much more difficult. Nottingham and Aarhus both implemented their trams in-house and Nottingham stressed the importance of keeping the same team of consultants together for 15 years.

These systems are very expensive and require huge commitments from the local authorities. Much of the costs relate to the relocation of underground services and upgrading the public realm, which are not necessarily transport costs. It is hard to reduce costs, though economies can be made by buying systems such as ticketing off-the-shelf rather than designing them afresh. However once completed most systems make a small operational profit.

Trams are a classic case for land value capture. The construction of new lines leads to an increase in property values around stops and if this uplift can be captured then it can cover a significant proportion of the costs. This was an important part of the finding in Dublin and Copenhagen but has proved more difficult in the UK.

There are many places in the UK that would love to build tram systems including Bristol, Leeds, Coventry, Oxford and Cambridge. The lessons from these case studies suggest that this will be a long and arduous journey. However if it can be integrated into a growth strategy, build a widespread partnership and tap into land value capture then it might just be possible. It is important that we do this – autonomous vehicles if they ever happen will support sprawl, as urbanists it is clear that trams are the future!

Dr Nicholas Falk is Executive Director of the URBED Trust